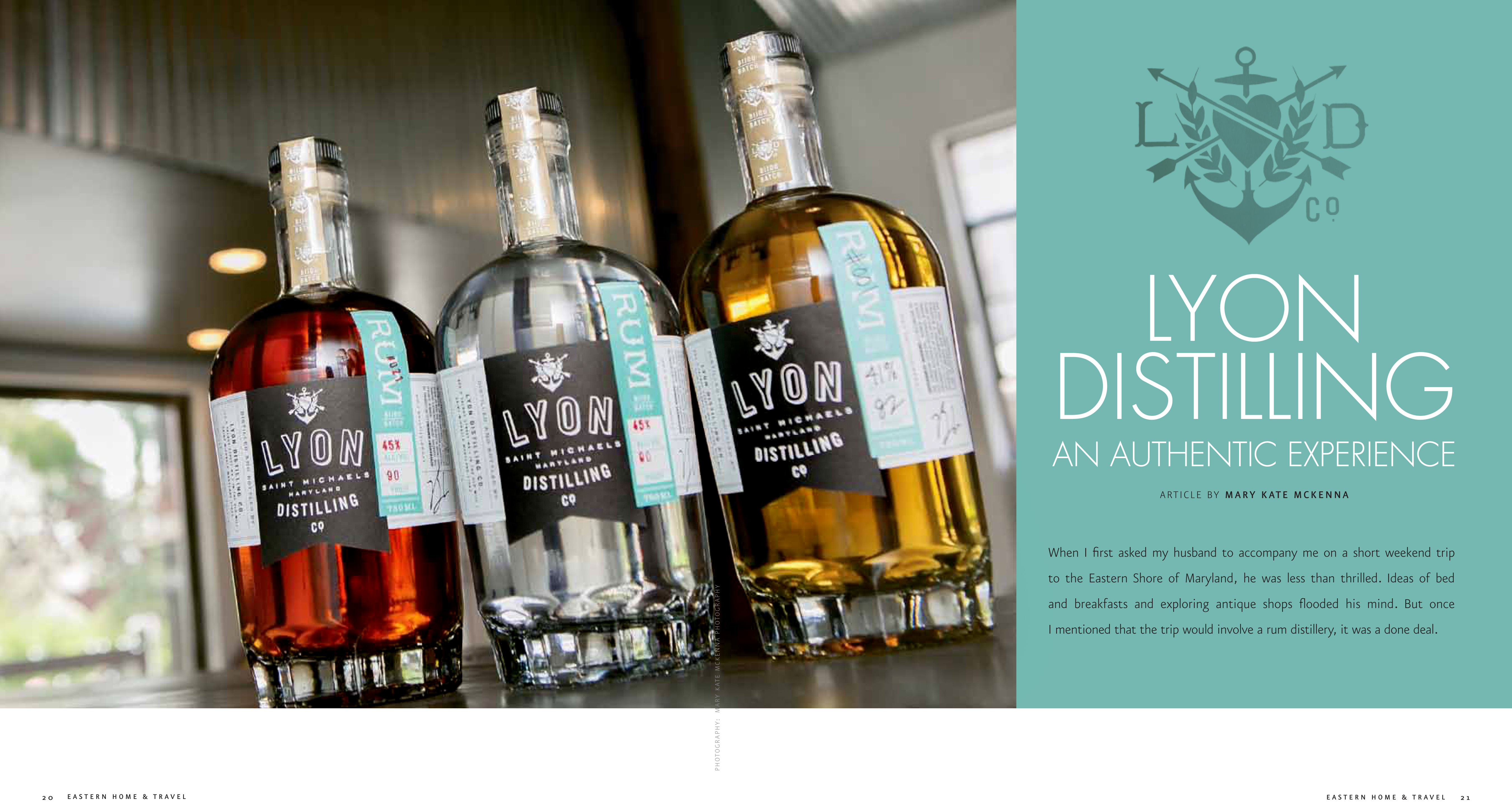 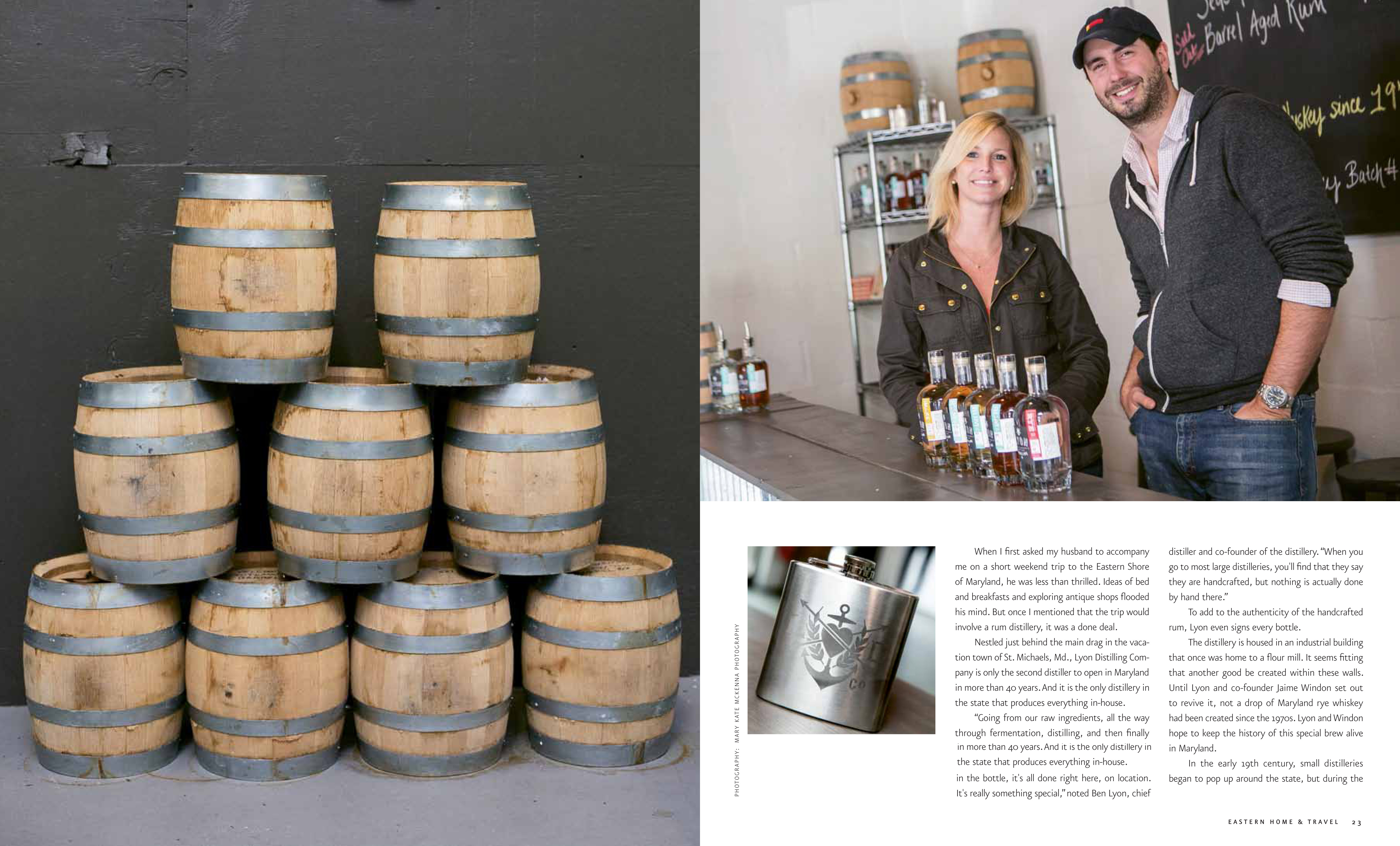 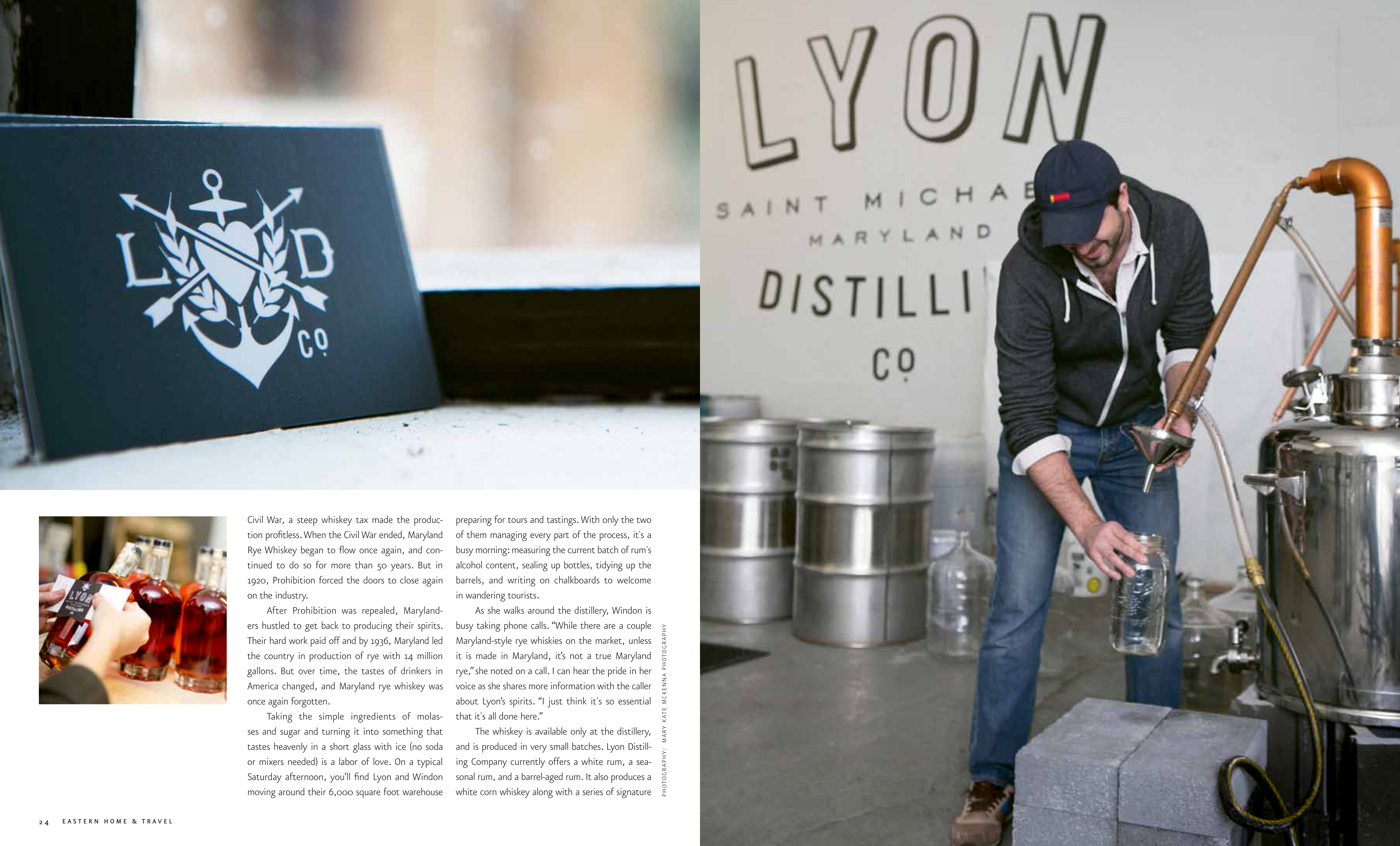 Nestled just behind the main drag in the vacation town of St. Michaels, Md., Lyon Distilling Company is only the second distiller to open in Maryland in more than 40 years. And it is the only distillery in the state that produces everything in-house. When I first asked my husband to accompany me on a short weekend trip to the Eastern Shore of Maryland, he was less than thrilled. Ideas of bed and breakfasts and exploring antique shops flooded his mind. But once I mentioned that the trip wouldinvolve a rum distillery, it was a done deal. Nestled just behind the main drag in the vacation town of St. Michaels, Md., Lyon Distilling Company is only the second distiller to open in Maryland in more than 40 years. And it is the only distillery in the state that produces everything in-house. “Going from our raw ingredients, all the way through fermentation, distilling, and then finally in the bottle, it’s all done right here, on location. It’s really something special,” noted Ben Lyon, chief distiller and co-founder of the distillery. “When you go to most large distilleries, you’ll find that they say they are handcrafted, but nothing is actually done by hand there.” To add to the authenticity of the handcrafted rum, Lyon even signs every bottle. The distillery is housed in an industrial building that once was home to a flour mill. It seems fitting that another good be created within these walls. Until Lyon and co-founder Jaime Windon set out to revive it, not a drop of Maryland rye whiskey had been created since the 1970s. Lyon and Windon hope to keep the history of this special brew alive in Maryland. In the early 19th century, small distilleries began to pop up around the state, but during the Civil War, a steep whiskey tax made the production profitless. When the Civil War ended, Maryland Rye Whiskey began to flow once again, and continued to do so for more than 50 years. But in 1920, Prohibition forced the doors to close again on the industry. After Prohibition was repealed, Marylanders hustled to get back to producing their spirits. Their hard work paid off and by 1936, Maryland led the country in production of rye with 14 million gallons. But over time, the tastes of drinkers in America changed, and Maryland rye whiskey was once again forgotten. Taking the simple ingredients of molasses and sugar and turning it into something that tastes heavenly in a short glass with ice (no soda or mixers needed) is a labor of love. On a typical Saturday afternoon, you’ll find Lyon and Windon moving around their 6,000 square foot warehouse preparing for tours and tastings. With only the two of them managing every part of the process, it’s a busy morning: measuring the current batch of rum’s alcohol content, sealing up bottles, tidying up the barrels, and writing on chalkboards to welcome in wandering tourists. As she walks around the distillery, Windon is busy taking phone calls. “While there are a couple Maryland-style rye whiskies on the market, unless it is made in Maryland, it’s not a true Maryland rye,” she noted on a call. I can hear the pride in her voice as she shares more information with the caller about Lyon’s spirits. “I just think it’s so essential that it’s all done here.” The whiskey is available only at the distillery, and is produced in very small batches. Lyon Distilling Company currently offers a white rum, a seasonal rum, and a barrel-aged rum. It also produces a white corn whiskey along with a series of signature rums, all of which are distilled on site in traditional pot stills. Groups of three to five people meandered in almost as soon as the doors were unlocked on a summer Saturday. Unsure of what to expect, guests asked lots of questions and finally did a tasting. You could see them prep and purse their lips, ready for something harsh and similar to a “hair of the dog” type swig. They then placed their cup down, and noted that it was smooth and nothing like what they remembered of their rum-chugging college days. “Exactly,” Windon said. As the newly christened Maryland rum-lovers headed out of the distillery onto their next adventure with their freshly purchased bottles, Lyon and Windon leaned over the small tasting room counter and pointed to the photographs on the wall which document the long renovation process. There was painting and power washing, building and licenses. Oh, so many licenses. When asked if they would do it all over again, the two founders immediately say “yes,” in unison. “It’s hard work, but really rewarding,” Lyon said. “Plus, rum is really delicious,” Windon added. I would have to agree (and so does my husband).