The Washington Post: Another Round of Making Rum in Coastal Maryland 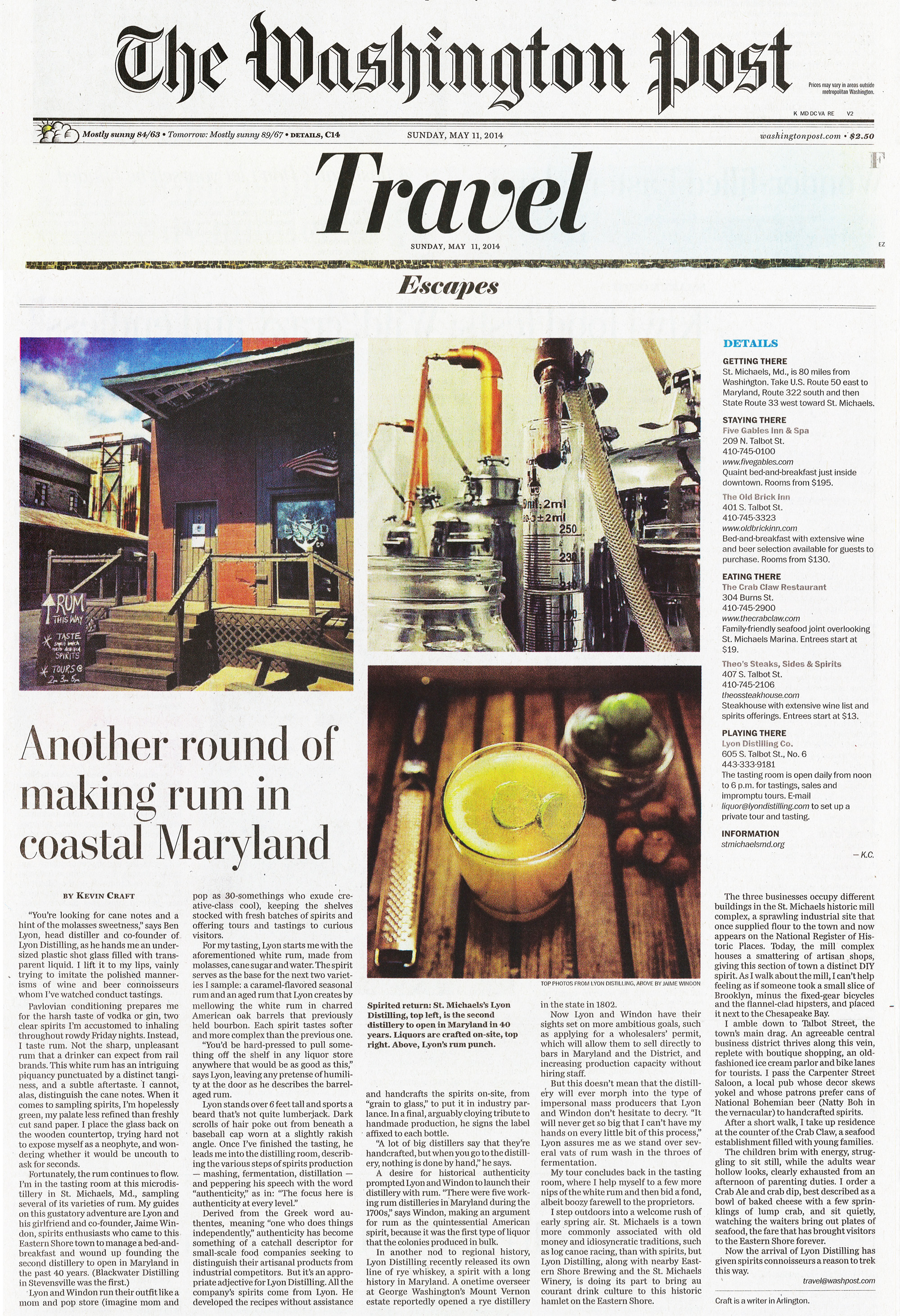 Another Round of Making Rum in Coastal Maryland
By Kevin Craft

“You’re looking for cane notes and a hint of the molasses sweetness,” says Ben Lyon, head distiller and co-founder of Lyon Distilling, as he hands me an undersized plastic shot glass filled with transparent liquid. I lift it to my lips, vainly trying to imitate the polished mannerisms of wine and beer connoisseurs whom I’ve watched conduct tastings.

Pavlovian conditioning prepares me for the harsh taste of vodka or gin, two clear spirits I’m accustomed to inhaling throughout rowdy Friday nights. Instead, I taste rum. Not the sharp, unpleasant rum that a drinker can expect from rail brands. This white rum has an intriguing piquancy punctuated by a distinct tanginess, and a subtle aftertaste. I cannot, alas, distinguish the cane notes. When it comes to sampling spirits, I’m hopelessly green, my palate less refined than freshly cut sand paper. I place the glass back on the wooden countertop, trying hard not to expose myself as a neophyte, and wondering whether it would be uncouth to ask for seconds.

Fortunately, the rum continues to flow. I’m in the tasting room at this microdistillery in St. Michaels, Md., sampling several of its varieties of rum. My guides on this gustatory adventure are Lyon and his girlfriend and co-founder, Jaime Windon, spirits enthusiasts who came to this Eastern Shore town to manage a bed-and-breakfast and wound up founding the second distillery to open in Maryland in the past 40 years.

Lyon and Windon run their outfit like a mom and pop store (imagine mom and pop as 30-somethings who exude creative-class cool), keeping the shelves stocked with fresh batches of spirits and offering tours and tastings to curious visitors.

For my tasting, Lyon starts me with the aforementioned white rum, made from molasses, cane sugar and water. The spirit serves as the base for the next two varieties I sample: a caramel-flavored seasonal rum and an aged rum that Lyon creates by mellowing the white rum in charred American oak barrels that previously held bourbon. Each spirit tastes softer and more complex than the previous one.

“You’d be hard-pressed to pull something off the shelf in any liquor store anywhere that would be as good as this,” says Lyon, leaving any pretense of humility at the door as he describes the barrel-aged rum.

Lyon stands over 6 feet tall and sports a beard that’s not quite lumberjack. Dark scrolls of hair poke out from beneath a baseball cap worn at a slightly rakish angle. Once I’ve finished the tasting, he leads me into the distilling room, describing the various steps of spirits production — mashing, fermentation, distillation — and peppering his speech with the word “authenticity,” as in: “The focus here is authenticity at every level.”

Derived from the Greek word authentes, meaning “one who does things independently,” authenticity has become something of a catchall descriptor for small-scale food companies seeking to distinguish their artisanal products from industrial competitors. But it’s an appropriate adjective for Lyon Distilling. All the company’s spirits come from Lyon. He developed the recipes without assistance and handcrafts the spirits on-site, from “grain to glass,” to put it in industry parlance. In a final, arguably cloying tribute to handmade production, he signs the label affixed to each bottle.

“A lot of big distillers say that they’re handcrafted, but when you go to the distillery, nothing is done by hand,” he says.

A desire for historical authenticity prompted Lyon and Windon to launch their distillery with rum. “There were five working rum distilleries in Maryland during the 1700s,” says Windon, making an argument for rum as the quintessential American spirit, because it was the first type of liquor that the colonies produced in bulk.

In another nod to regional history, Lyon Distilling recently released its own line of rye whiskey, a spirit with a long history in Maryland. A onetime overseer at George Washington’s Mount Vernon estate reportedly opened a rye distillery in the state in 1802.

Now Lyon and Windon have their sights set on more ambitious goals, such as applying for a wholesalers’ permit, which will allow them to sell directly to bars in Maryland and the District, and increasing production capacity without hiring staff.

But this doesn’t mean that the distillery will ever morph into the type of impersonal mass producers that Lyon and Windon don’t hesitate to decry. “It will never get so big that I can’t have my hands on every little bit of this process,” Lyon assures me as we stand over several vats of rum wash in the throes of fermentation.

My tour concludes back in the tasting room, where I help myself to a few more nips of the white rum and then bid a fond, albeit boozy farewell to the proprietors.

I step outdoors into a welcome rush of early spring air. St. Michaels is a town more commonly associated with old money and idiosyncratic traditions, such as log canoe racing, than with spirits, but Lyon Distilling, along with nearby Eastern Shore Brewing and the St. Michaels Winery, is doing its part to bring au courant drink culture to this historic hamlet on the Eastern Shore.

The three businesses occupy different buildings in the St. Michaels historic mill complex, a sprawling industrial site that once supplied flour to the town and now appears on the National Register of Historic Places. Today, the mill complex houses a smattering of artisan shops, giving this section of town a distinct DIY spirit. As I walk about the mill, I can’t help feeling as if someone took a small slice of Brooklyn, minus the fixed-gear bicycles and the flannel-clad hipsters, and placed it next to the Chesapeake Bay.

I amble down to Talbot Street, the town’s main drag. An agreeable central business district thrives along this vein, replete with boutique shopping, an old-fashioned ice cream parlor and bike lanes for tourists. I pass the Carpenter Street Saloon, a local pub whose decor skews yokel and whose patrons prefer cans of National Bohemian beer (Natty Boh in the vernacular) to handcrafted spirits.

After a short walk, I take up residence at the counter of the Crab Claw, a seafood establishment filled with young families.

The children brim with energy, struggling to sit still, while the adults wear hollow looks, clearly exhausted from an afternoon of parenting duties. I order a Crab Ale and crab dip, best described as a bowl of baked cheese with a few sprinklings of lump crab, and sit quietly, watching the waiters bring out plates of seafood, the fare that has brought visitors to the Eastern Shore forever.

Now the arrival of Lyon Distilling has given spirits connoisseurs a reason to trek this way.

Whiskey Reviewer: Lyon Distilling | Getting Maryland Back Into The Rye Whiskey Game